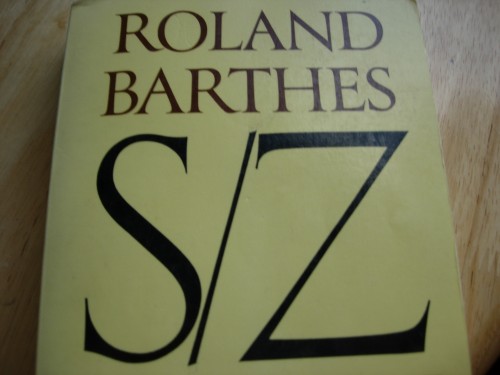 S/Z is the first work of proper “lit’r’y theory” I ever picked up. It was a required course for comp lit majors, and I have my suspicions that this was the first work listed on the syllabus precisely so that we could take the appropriate advantage of drop/add week. Years later, and after having read much more of notre cher Roland, I came back to it, and I have a theory of my own. That it’s probably the most important book you could ever read if  you are invested in the study of literature. Particularly if you want to teach literature. This theory has a secondary component, which is that S/Z can also devolve pretty significantly if not done correctly.

Barthes claims that the author is dead. But there is a responsibility that comes with believing his claim. And if you neglect that specific responsibility, you will slowly but surely (or, in fact, quite quickly) unravel the possibility of any contextual knowledge.

Remember that story “If you give a mouse a cookie”? All about the inescapable and uncontrollable series of events that come disastrously to pass with the smallest of acts? There’s a trajectory that one can trace, should one have a relationship with Barthes, that follows a similar process of cause and effect. Allow me to demonstrate…

If you give an undergraduate comparative literature major some Barthes, they’re going to think that the author is dead*.

And if they think that the author is dead, then they’ll want to say there’s nothing beyond the text – no history, biography, psychology, sociopolitical circumstance**.

And if they think there’s nothing beyond the text, then they’ll want some other way to interpret.

And if they want some way to interpret then they will learn that it is entirely possible to engage a text in such a way that they are not only reading it, but actually writing it. Creating something that existed as a mere shadow of itself somewhere inside this text thing that they bring to life.***

And if all of this happens, they’ll go ahead and ditch context for the sake of really good interpretation. Which would be over and above any knowledge of a world that may or may not have given rise to the text itself. (Particularly since wikipedia will now  give them any little contextual tidbits they might feel like digging up.)

And since this is really quite a lot of fun, they’ll want to go to grad school.

And when they get to grad school, they’ll have to take their doctoral qualifying exams.

And if they want to do well on their doctoral qualifying exams, they’ll suddenly be confronted with a form of knowledge that uses arbitrary markers like “the century” and will have to put all of their hard earned interpretative prowess into a chronological system.

And if they want to create a chronological system, then they’ll have to go outside of the text.

And if they go outside of text, after all these long years, they’ll realize that it’s actually only fun to do any of these really awesome things we do, whose names are, in fact, various incarnations of the word “structure” – with prefixes and suffixes like “de-” and “-ism” – if you have any contextual knowledge to get rid of in the first place****.

And if they do this, then they will realize that, irony of ironies, it is impossible to take Barthes outside of the context in which he’s writing. And that this project is not just a project in and of itself, but a conversation – no, a fight to the death – with everything that came before.

And so, like the mouse, we end up where we started.

Luckily, for Barthes, rereading – due to constant and forceful forgetting – is the most important facet of reading.

** “Theory of the text” – the text produces its own theory. There is no metalanguage by which to speak of a text.

*** S/Z – the scriptible or the “writerly” as it is translated into English by Richard Miller. The text we work at. The relationship to the text. The unwritten story which falls to the responsibility of the reader. “Ourselves writing.”
**** “If we want to remain attentive to the plural text…we must renounce structuring this text in large masses, as was done by classical rhetoric and by secondary-school explication; no construction of the text: everything signifies ceaselessly and several times, but without being delegated to a great final ensemble, to an ultimate structure.” (S/Z)