Roger Célestin’s book From Cannibals to Radicals (University of Minnesota, 1996) focuses on the structure of exoticism as a trajectory from Home to Periphery (and back) as negotiated by the traveler/writer/philosopher. Rather than sticking to nineteenth century French texts (from which the term issues) he goes as far back in time as Montaigne and all the way up to V.S. Naipaul.

(Wait – can Naipaul be an exoticist? He’s not European. I haven’t gotten to that chapter yet but I believe it has something to do with reverse exoticism of a sort. Pines for palms, skyscrapers for huts, something like this…) 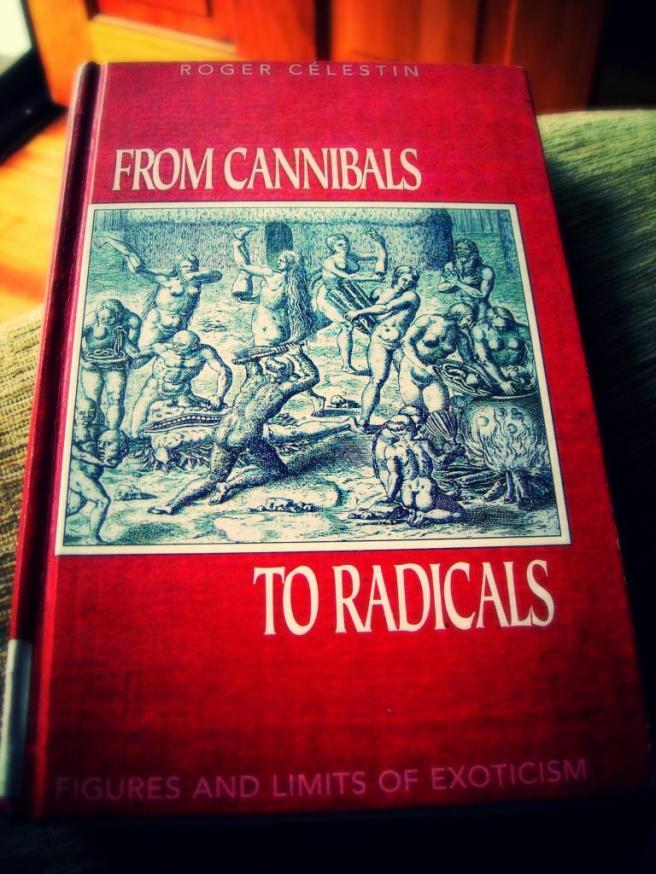 Though I found the introduction a little rocky for several reasons (not least of which Célestin’s tendency to play fast and loose with geometrical shapes – look, is it a triangular journey or is it circular? even if both entail coming back to the point of departure, these are different things, sir!) the chapter on Montaigne is quite enjoyable.

I find most commentary on Montaigne enjoyable. First of all, because the Essays are endlessly rich, and secondly because it is impossible to write about Montaigne without a certain amount of love and affection. You can’t do it. Montaigne is the most lovable. He is like everyone’s grandfather. Or like everyone’s kind of weird uncle who mostly keeps to himself (up in the attic where he has scrawled quotes of Seneca all over the walls) but comes around with lots of presents and funny stories at Christmas. He complains about his bowels, sure, but that’s okay because he also knows that “kings and philosophers shit; so do ladies.”

Other fun things about Montaigne are his total freedom with the language of others (“I do not speak the minds of others except to speak my own mind better”); his rather beautiful relationship with Etienne de la Boétie (“Because it was he; because it was I”); and his interest in horses (he was, after all, Michel Eyquem – horse – de Montaigne). The latter of these concerns us today.

In the Célestin’s chapter entitled “Montaigne; the Private, Savage Self,” he comments on the interesting relationship that this Renaissance philosopher and essayist had to the “exotic” peoples and lands which were, at this time, being uncovered right and left by European explorers. Montaigne actually had the interesting opportunity to meet several of the Tupinamba when they were presented to Henry III. This, combined with reports coming from French Antarctica (present day Brazil) about their customs – including cannibalism – has a significant impact on Montaigne.

One of the things Montaigne is dealing with throughout the Essays is relativism. As the world gets larger, it gets more and more varied. There are seemingly infinite ways of living. Infinite ways of organizing a society. Infinite customs to abide by. This puts the European on shaky ground – how do we know that our brilliant, shining star of civilization is a) as brilliant as we think it is and b) civilization at all? Throughout time, this question will be answered by something along the lines of: “Because we have the largest guns. Because our buildings are the biggest. Because we can produce many things at a rapid speed that are identical to each other. And opera. Don’t let’s forget opera.” For Montaigne it is not so simple.

One problem is that he is unwilling to relinquish the sense of who he, irrevocably, is (a white dude in a European nation whose work will, in fact, be cited as cause to believe that Europe is, indeed, the height of civilization, after all); but that he simultaneously recognizes the appropriateness of other modes of being, living and thinking to other societies. That the Tupinamba are reportedly cannibals is, essentially, no biggie for Montaigne.And part of his literary project will then become not how to find ease with particular practices which are so different from his own, but rather, how to make peace with the fact that there will always be an infinite number of differences in the world.

According to Célestin, this is why Montaigne writes. Montaigne does not want to become the college kid who studies abroad in India, Tanzania and New Zealand, and whose identity can be summarized simply as anything other than the middle class white family he came from. Montaigne wants to visit, to learn, to consider, and then to continue eating pheasant with a fork and knife.

Montaigne’s experiences with the Other (or reports of the Other, which for the purposes of the argument take on as much validity) will take him in many different directions – philosophically as well as geographically. So Montaigne has to rein himself in.

Célestin describes this as such: “Thus the Essays in general, and the representation of the exotic in particular, are a project of containment, an attempt at stabilizing…” (39) He will then cite Montaigne’s “Of Idleness,” where the author proclaims that his mind is “Like a runaway horse,” which makes writing an essential task, so that he may put some kind of order into the infinitely multiplying thoughts which occur to him. Here, the project of understanding one’s place within the overwhelmingly vast world full of overwhelmingly diverse people is equated with the project of writing and collecting what ceaselessly expands in the human mind.

But Célestin, how did you miss it??? You said it, it’s right there in front of your nose. We all know that Montaigne has a horse thing. You can trace them running rampant through the pages of the Essays like mad markers of an authorial identity. It is right there just begging to be punned. Montaigne does not want to stabilize the infinitely exotic. His entire corpus could be described as an attempt to stable-ize his own being, precisely as Michel Eyquem de Montaigne.