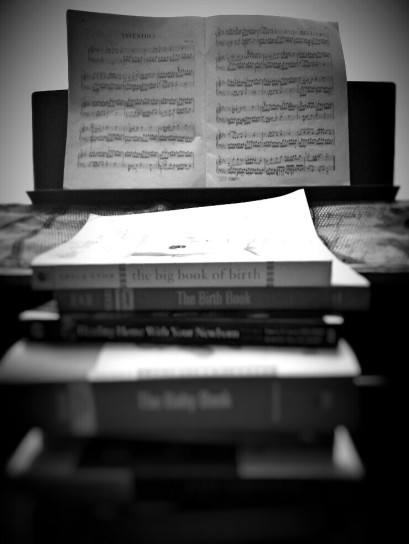 This awkward sentence nudged itself into some of my written correspondence this morning, and I gagged a little when I reread it before sending. My first impulse was to emphatically land my finger on the delete key, and to retype something a bit more polished sounding. I’m revisiting the Bach Inventions, in the hope of finally learning them all. Nice, right?*

I imagine that the awkwardness in the original has something to do with the overload of verbs up front – started, to finish, and learning are a fair number of actions to take into account. Particularly as they are only meant to signify a single but continuing process.

Yet there is also the problem of starting to finish something. What does that mean? I know what starting is, likewise finishing. But at what point in a project do you start to finish? Is three quarters of the way through a safe bet? Halfway? What if all beginnings are, in fact, the start of a finish? Isn’t that the teleological nature of all our endeavors? When we begin something, it is with the intention to end it. And so perhaps what strikes me as strange about saying I’ve recently started to finish learning the Bach Two-Part Inventions is that, in truth, I started them quite a long time ago. Only recently have I made a point to finish learning them.

Little more than a month ago, my goals were measured in chapters and sections (sometimes paragraphs and sentences) of a large written document that had a very clear end in sight.** Without these goals, I literally have no idea how to live my day.

I need new goals. And the first one that appeared was Bach. Because Bach and I have unfinished business.

As a twinkly eyed piano performance major, I had – like everyone else – learned four or five out of the fifteen two-part inventions. There’s a reason for this. They are pedagogically sound, in a way that something like Burgmueller’s études simply aren’t. Whereas the latter teaches you how to do something technically difficulty with your fingers (and okay, yes, that is important but…), the former teaches you how to think two different lines at once. The right hand and left hand are discrete entities, that are yet functioning together. (That’s called counterpoint.) And this is a really hard thing to get, which is why, after vowing (in the way that nineteen year olds vow things) to learn all fifteen by the end of fall term, I had abandoned them completely and changed my major.***

I switched to French & Comparative Literature and never looked back. Really. A decade later, after a doctorate in French & Comparative Literature, it is pretty clear that I have not looked back even once. (To be fair, I looked sideways a few times, like that gap year after my MA program that I spent juggling anywhere between four to five part-time jobs at once… You can see how we graduate students get ourselves into these situations – situations in which more higher education seems like a good idea. If impoverished overemployment is the only alternative to the lonely, low-paid labor of the mind, then I say no thank you.)

This is how I currently find myself in the unique situation of having time on my hands. The kind of time that comes from taking a significant pause between major life events – life events like finishing one’s PhD and expecting one’s first baby. What exactly do you occupy yourself with in the interim? Besides polishing up a few dissertation sections into article form, and reading all the books you’ve been eyeing longingly for the last five years, and taking long (slow) walks, and googling things like “Is attachment parenting really anything worth considering for more than five minutes?” and napping…

And that’s when Bach appeared. Because Bach takes time and concentration. Much more than I ever had as an undergrad, and certainly more than I will ever have again. There seemed to be no better answer to the question “How shall I fill my empty time?” If this particular epoch of liminal existence feels like a three month plane ride, then why not fill it with the kind of things one never has time to do?

So every morning, I sit down at my keyboard and slowly (painfully slowly) tap away at a line of music that, after two hours or so, is rendered more or less speedy in tempo, more or less accurate in notes. And this sounds excruciatingly boring. And it is sometimes. (Especially when I click back into “good music major” habits and actually play some warm-up scales.) But it is also a divine luxury, to be able to sit peacefully, without disturbance, and take all the time that I need.

And this practice expresses what really is so important about Bach Inventions as opposed to any other series of keyboard literature floating out in the world: they require slowing oneself down nearly beyond imagining. It is a lesson I never learned as an impatient teenager in the practice room; it is a lesson that I never learned as an impatient graduate student in the library. The lesson of tedium is hard won, and much of life is tedious indeed.

Much of art is tedious, in fact, requiring an immense amount of techne and very little of the inspired whatchamacallit of human brilliance. These have their temporal implications as well. Craftmanship takes years of repetition to develop whereas this flash of inspiration – the creative genius that I suppose we may in some ways thank Kant for (de)limiting: “Beautiful art is the art of genius”**** – is to be understood as the work of the moment. The thunderclap, the lightbulb, the “Eureka!” of the bath tub.*****

So I attempt to finish this piece of music in the remaining weeks the way that other soon-to-be parents occupy themselves with reading baby books and decorating the nursery. But I cannot imagine that the newly arrived member of our home will be at all appreciative of my ability to interpret the timbre of its cries or the color of its vomit, nor with how well the whimsical paintings on the walls match the crib bedding. It will also, in all likelihood, fail to be impressed by its mother’s ability to play all fifteen of Bach’s Two-Part Inventions. But it may notice the stores of maternal patience that she has acquired in the process.

This is time in two parts. On the one hand, the large openness of the time it takes to make a human, on the other hand, the screeching pace of a metronome moving from 68 BPM to 120. Counterpoint, which is not the same thing as harmony at all. It functions – like multiple stratas of time – in dissonance and resolve.

*Hire me as an editor. I have competitive rates.

***That is actually the fault of Shostakovitch.

****This is expressed in the Aesthetics book of The Critique of the Power of Judgment (1790).

***** The exclamation is attributed to Archimedes, who discovered that bath water is displaced in equal proportion to the amount of naked Greek body you submerge in it.

Uncategorized
Bach, music theory
← The Millennium Trilogy and Relearning to Read the “Readerly” Text
→ what is an ‘invention’ ?

One response to “Time in Two Parts”