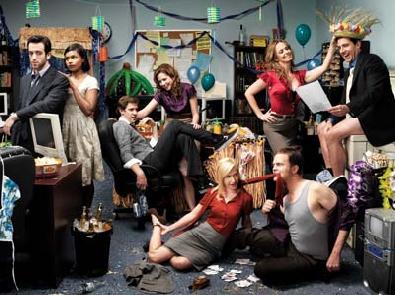 In the early days, people asked us questions like how long we would take off from work and had we researched daycares in the area. Had we read about attachment parenting? Would we let our baby cry it out?

But other recent parents asked nothing about parenting at all.

Instead, they asked us which television series we had lined up to watch.

At first, I did not fully grasp the significance of the question. But. Today, after countless barely conscious feedings interspersed with anxiety dreams, thousands of loads of laundry, a million cups of tea, endless periods of semi-solitary confinement with a tiny tyrant for a cell mate, never knowing what to do, never knowing what to say, and experiencing a limit state of humanity in which I am no longer able to form sentences in a recognizable language…I understand why they asked.

To new parents, those people inside the television are everything. They take on more emotional significance than most of us are willing to admit. They become our friends. They become our strength.

And in case you think I’m praising the new crop of genius television exemplified by shows such as Louie, or Breaking Bad or Fargo, let me reassure you, I am talking about the absolute cheesiest of the cheeseballs. I have reminisced about high school with the kids from That 70’s Show, I have fought demons in the middle of the night with Buffy the Vampire Slayer. My baby cried when Rachel Green’s baby cried and then for good measure, I cried when all the Friends left that quirky, rent controlled apartment.

So you people out there, who have watched so many moments of manufactured emotions that are so much more comfortable than the ones you really feel stream before your eyes at an alarming speed, you will understand why tonight we are having a farewell party, Office style. We’ve got grocery store cake, veggie tray, microwave popcorn, juice, and some random liquor that we found in a closet. We’re retiring The Office.

Farewell to Scranton. Thanks for keeping us sane.

Other thinks
motherhood, television
← How to Feel Like a Visitor in Your Everyday World
→ Sigal Samuel’s Hermeneutics