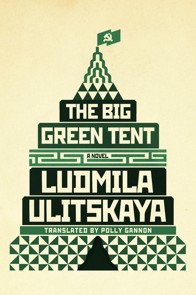 Usually, I cannot abide the claim that a book is “like a love letter to” another book. The expression rarely makes any real sense. And it strikes me as an unnecessarily flowery way to say that one book is like another, or influenced by another, or otherwise responding to another book in some way.

But in this case, there is absolutely no other way to describe The Big Green Tent, the latest novel of contemporary Russian writer Ludmila Ulitskaya, than as a love letter to Russian literature. It is exactly that. It is wonderfully, whimsically, beautifully that.

To read this book is to be stricken around every turn by the ghosts of great writers haunting the pages. It’s as if, in every punctuated pause in the prose, you can hear the whispers of an entire tradition. It is Tolstoy. It is Pasternak. It is Brodsky. If that sounds very masculine, that’s because part of what Ulitskaya is dealing with here is the overall maleness of Russia’s literary history. But there is quite a bit of Anna Akhmatova and Marina Tsvetaeva here as well. And her female characters are, in part, a response to the lack of convincing women in the pages of classic Russian literature. (Not only in this book but particularly in previous works like 2002’s Medea and Her Children, one of my absolute favorite books.)

The premise of the novel is a romp through the world of clandestine literature – samizdat – that circulated throughout the USSR in the period following Stalin’s death. At times, this world of censorship and constant paranoia is cruel and hopeless. Yet Ulitskaya’s humor shines through, with hilarious incidents such as copied pages of The Gulag Archipelago accidentally stuffed into a teenage girl’s new boots in order to break them in. In the author’s signature style, (a style that is – permit me – so very Russian) both heartbreaking and comically magical, this small world of the 1950’s Moscovite intelligentsia is portrayed with the intelligence and mysticism of one recalling a generation that just grazes her own youth. In this way, the book has the kind of fascination and irreverence that we all feel for those childhood years that are vaguely remembered but intimately felt.

Time and temporal playing-around is perhaps the aspect I most enjoyed about the book. There’s a term I’m reminded of and that I’m pulling from somewhere else entirely: “overlapping temporalities” (and you can ask me from where if you’re curious). What the book does is not flashback and flash-forward, but rather stretches of time – both long and short – as told through varying perspectives. Sections of the text are even repeated, quite blatantly, almost as though certain collections of phrases serve as a sort of portal from one story into another.

For a while, the book goes along chronologically, following the friendship of Ilya, Mikha and Sanya (photographer, writer and musician respectively) with an attention that is consciously archival. This friendship is the scaffolding of the novel, but upon that structure is built an intimate portrait of a particular group of people at a particular time.

“And how numerous could they have been, these strangers who crossed paths in the cloakroom of the library, of the coat check at the Philharmonic, or in the quiet recesses of museums? They did not constitute a party, a social circle, a secret society; they were not even a cohort of like-minded people. Perhaps the only thing that united all of them was a mutual hatred of Stalinism. And, of course, reading. Hungry, unrestrained, obsessive reading. Reading was a passion, a neurosis, a narcotic. For many, books became surrogates for life rather than mere teachers of life.”

It is a circle of characters that expands in leaps and bounds and then in closes back in on the focal point of their friendship. In what begins to read almost as a series of linked short stories, we are suddenly presented with a brand new character, who has no immediately obvious relation to the three fellows, only to discover that they are joined to our main characters by degrees of situation or relation. This happens time and again. Just as we think that we are about to exit the ring of familiars, we are drawn back in. As a storytelling mechanism, it is very effective. But the technique also adds to the portrayal of the way social and familial relations worked during this fraught period of history. Everyone is linked. And every link eventually leads back to someone who will be questioned, tried, sentenced, expelled or imprisoned.

Above all, the novel is a brilliantly conceived exploration of the way in which literature, and art in general, finds itself always the conduit of an irrepressible revolutionary spirit. The arts do not merely represent life or play a role in life. They become life.

There’s a wonderful passage that illustrates the way that art and life imitate each other, as a bizarre offshoot of the way that a paranoid government kept obsessive records, almost with the same zeal that artists created art.

“More than a decade would pass before the degenerate heir of Colonel Bibikov, Colonel Chibikov (the immortal Gogol grins each time such echoes in nomenclature spring up), would get his hands on the childhood archive, and fifty more years would pass until an Institute for Central and East European Studies, in a small German town with a fairy tale name, would register this archive under a seven-digit number with a forward slash, and the archive would pass into the hands of another one of the LORLs, [‘lovers of Russian literature’ – a club founded by the school friends] also a student of Victor Yulievich’s, but a year younger, for safekeeping.”

We catch these characters not at the Benjaminian moment of crisis, but more so during a period of repression and the accompanying growth of a rebellious spirit among the people. No one in the novel is plotting the overthrow of the existing government. But they are deeply concerned with the state of their souls, and with trying to achieve a kind of spiritual freedom. Through Ulitskaya’s careful and witty telling, they are stunningly conceived portraits of human feeling and behavior. Not a one without beauty and flaw in nearly equal measure.

One response to “Ludmila Ulitskaya’s The Big Green Tent”